Flexibility and functionality that practices need

Electronic medical record (EMR) systems offer countless useful tools to healthcare providers — but they’re expensive, and no single product can possibly have every feature that a practice will ever need. Integration platforms such as Qvera Interface Engine (QIE) can add essential data exchange and extraction capabilities to EMR systems that these products either don’t offer, or charge high prices to obtain.

Virginia Women’s Center (VWC) is a full-service women’s healthcare practice that serves roughly 950 patients per day at its five locations across central Virginia. In 2020, VWC’s IT team decided to leverage their existing QIE subscription to switch EMR platforms more conveniently and affordably. With QIE’s HL7 messaging capabilities and Qvera’s excellent customer service resources in their pocket, they initiated the process of switching over to athenahealth’s athenaOne platform. 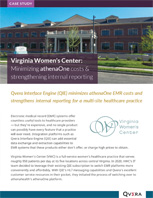 First, VWC created an athenaOne interface to exchange patient demographic data and scheduling information contained in ADT/SIU HL7 messages with one of the practice’s software products.

“This interface was initially developed to pass ADT and SIU information to an internal server running PenRad mammography reporting software,” says Marc Conklin, VWC’s Director of Information Technology. “Using Qvera, we then modified that interface to also communicate with other applications.”

“There is a cost for every specific athenaOne interface,” explains Mike Williams, Vice President of Sales at Qvera. “By leveraging QIE, Virginia Women’s Center can pay for one, then use that interface for multiple other systems.”

So, in addition to sending data to PenRad,

“The interface engine forwards messages over VPN without requiring additional athenaOne interfaces and associated costs,” Conklin says. “These items represent $15,000 in one-time savings for us.”

“QIE can package the data in a format more easily accessible for intranet and other applications. With Qvera, I have exponentially more ways to access and use the data”

One-time price reductions are only a small part of VWC’s cost-savings story. Far more valuable, Conklin says, is QIE’s ability to mine patient data from HL7 messages for internal reporting use.

“Athena has a really nice report builder that you can pull a lot of data from, but it can’t be accessed by any sort of automation,” Conklin explains. “They also have an API, but there are all sorts of legal hoops to jump through, as well as costs, to get access to it.”

For incoming messages, Conklin’s team set up an operation using “insert/update” commands to store patient and appointment information into SQL database tables. These tables are accessible through the practice’s

intranet. QIE also harvests essential internal reporting data by stripping PDF reports out of outgoing messages being sent to the PACS, and by populating another SQL table with information related to mammography orders.

“QIE can package the data in a format more easily accessible for intranet and other applications,” Conklin says. “By using Qvera, I have exponentially more ways to access and use that data.”

Using a single EMR interface acquired for its mammography services, the center has built out QIE data exchange tools for all of its departments, including obstetrics, gynecology, bone health, and mental health.

“Mammography was just the catalyst for us purchasing the interface with athenaOne,” Conklin says. “That’s the great thing about it — thanks to QIE, we leveraged the purchase for one service line to apply to all of our service lines.”

When it comes to getting maximum value out of EMR systems, additional software products, databases and health information exchanges (HIEs), QIE provides the flexibility and functionality healthcare practices need.

Because these cookies are strictly necessary to deliver the website, refuseing them will have impact how our site functions. You always can block or delete cookies by changing your browser settings and force blocking all cookies on this website. But this will always prompt you to accept/refuse cookies when revisiting our site.

We fully respect if you want to refuse cookies but to avoid asking you again and again kindly allow us to store a cookie for that. You are free to opt out any time or opt in for other cookies to get a better experience. If you refuse cookies we will remove all set cookies in our domain.

We provide you with a list of stored cookies on your computer in our domain so you can check what we stored. Due to security reasons we are not able to show or modify cookies from other domains. You can check these in your browser security settings.

If you do not want that we track your visit to our site you can disable tracking in your browser here:

We also use different external services like Google Webfonts, Google Maps, and external Video providers. Since these providers may collect personal data like your IP address we allow you to block them here. Please be aware that this might heavily reduce the functionality and appearance of our site. Changes will take effect once you reload the page.

The following cookies are also needed - You can choose if you want to allow them: